Meet Angela. A fiancé, daughter, and valued member of the Strongest Families team. Recently she shared with us her experience as a military child, how that has shaped her life as an adult, and how that all brought her to Strongest Families Institute. 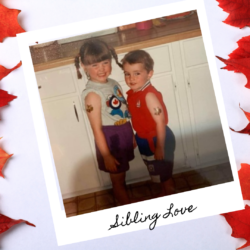 Growing up Angela told herself that she would never fall in love with a military member – the added anxiety just wasn’t worth it. Growing up as a military child had caused feelings that she did not want her children to experience. That was until she met Josh. Little did she know she would meet the love of her life, who would not only show her unconditional love but help her understand that her thought process was impacting her life in an unhealthy way. Josh would help her open a door she didn’t know she had shut.

As a military child, Angela described herself as a “chameleon” (a lizard with skin that changes colours). Someone who could blend into any circumstance and adapt to be what was needed – all while avoiding who she really was.

“I knew I was not going to be in one place for long, so I didn’t need to learn how to adjust or figure out who I was as a person. Every 1-2 years, each new posting allowed me to be someone new.”

This was until she began attending university and would now be in one place for longer than she had ever been – six years. With the help of Josh, she realized that she could no longer run or change when situations became difficult.

Angela now had to figure out “who” she was. This tough realization led to overwhelming feelings of anxiety in many common areas of life, including school, work, finances, and her relationships. Because she was no longer able to run, she knew that she would have to face her feelings and learn how to manage them if she wanted to live life happily with Josh and break the pattern.

This led her to the Strongest Families’ ICAN program. Through held back tears, Angela says that the kindness, genuine care, and compassion from her Coach, combined with the skills she learned, has brought her to where she is today – but that journey wasn’t easy.

“Midway through I wanted to give up – things were not getting better fast enough. I wanted to be fixed faster.”

In a moment of overwhelming anxiety and despair, Angela called her Coach outside of their scheduled weekly call.

“She was so kind and caring. She took the time to remind me that I had the tools to help me in moments like this, and together we practiced the relaxation skills in the program. Then, we refocused on a new plan forward.”

After that, all the hard work Angela had invested in her mental well-being came together.

“I could see how each session worked with the next. All the time, energy, and effort I had put into this was finally working. I was feeling better than I had in years. It is why I can share this story with you today, and why now, I have chosen to make a career at SFI – paying it forward per se.”

When asked if she could offer some advice to military families about anxiety – adults, youth or children, she offered this:

“For me, every behaviour has a feeling. As a child, when asked if I wanted to go meet new friends, go shopping, or go on vacation I would act out. This was just another reason to do something new, be someone new, that I didn’t want to be. Instead of talking about how I really felt, I got anxious, and then angry.

For military families, children may be feeling things that are exacerbated by their unique situations. Try talking to them about why they are feeling a certain way, and if you need help navigating that conversation, reach out to us, we can help. I am living proof”.

Our Strongest Families programs are customized to meet the needs of our clients and because of this, our staff understand the unique situations military families face. Our military division is led by a military spouse. Staff receive military competency training.

Today as we reflect on the many sacrifices our military and veteran families face during active duty, let’s also remember the families at home and how they too may be fighting their own battles.

To learn more about how we support military and Veteran families, please visit our website.

The COVID-19 pandemic has affected many Canadians. The Strong Families Institute recognizes that many families, youth and adults are experiencing more pronounced symptoms due to the many unknown variables surrounding the pandemic.

We are responding by helping clients affected by COVID-19 and supporting those who experience impacts in their daily activities due to more sensitive behavior and anxiety concerns. We are closely monitoring provincial plans and public health guidelines for combating COVID-19 and adapting skills to meet the unique needs of clients during the pandemic. Please note we are NOT an emergency service.  If you are in need of immediate help, please call 911