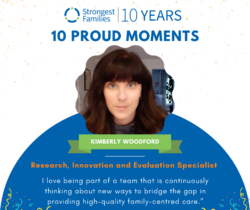 Since then, Kim has had many roles at SFI, mainly within the research and evaluation side of the institute. Today, she serves as its Research, Innovation and Evaluation Specialist. A perfect role for her as one of the things she enjoys about working at SFI is its propensity to innovation. “I love being part of a team that is continuously thinking about new ways to bridge the gap in providing high-quality family-centred care.”

“I have seen SFI programs go from research to service delivery and small contracts to national ones,” says Kim. “In the past three years alone, we developed the ICAN program for adult anxiety and depression, introduced a client app, and aligned our programs with the ‘stepped care’ delivery model.”

“We never stop looking forward, which can be tough for a fairly small charity,” she says. “But we do it without ever compromising our high level of care.”

Kim’s proudest moment during her SFI tenure was having the opportunity to travel to Vietnam and New Zealand to talk about the power of Strongest Families and the positive difference its programming can have on families dealing with mental health issues, no matter where they live in the world.

Administratively, Theresa Cunningham has done it all. So much so that she’s the unofficial keeper of SFI’s institutional history – wherever anyone is stuck on something, they inevitably say, “we need to ask Theresa!”

Theresa joined SFI in 2011 after 13 years of raising her family full-time. “Returning to the workforce with a huge gap in your resume can be daunting. But when I met with SFI, they offered me a job on the spot…and my first interview hug!”

She began her journey with SFI as an administrative assistant, but her responsibility burgeoned to managing leases and vendor contracts, payroll and finance clerk, and office manager (with a few side tasks added along the way). Today she serves as SFI’s Director of Business Development and is pitching in as Interim VP of Strategy and Engagement.

“The best part of my job is working alongside my like-minded team members to help children and families live healthier and fuller lives. That’s really SFI’s core and what our team does so well.”

Her most challenging project – securing SFI’s charitable status – also serves as her proudest achievement and an absolute game-changer for SFI. “With our legal team, we worked through a long and very involved application process. But it was key to SFI’s future growth and long-term success.”

SFI officially became a charity in 2017, which enabled us to pursue corporate and philanthropic gifts — one of the first coming from Bell Let’s Talk in the amount of $1 million! The rest, as they say, is history. 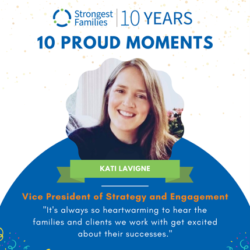 For Kati Lavigne, working at Strongest Families means helping people live better lives. She was hooked when her first client filled out their end-of-program letter and saw the progress they had made. “It’s always so heartwarming to hear the families and clients we work with get excited about their success.”

Over the last decade, there have been many changes made to consistently generate and maintain successful programs. Sometimes, what needed to be done was chaotic, and a bit uncharted, but Kati took that all in stride. “Every office space change, every new system to learn, every new staff to on-board, every new department to develop. It all comes back to one thing. Our charity was growing, meaning we could help more people.”

Kati says that the initiative that she is most proud of was getting our first provincial contract, working with pediatric referrals from across Nova Scotia.

“This was huge for us. Bell Let’s Talk’s first million-dollar gift leveraged the contract with Nova Scotia, which quickly expanded to all four Atlantic provinces. It was a great day when the collaborations were formally announced. I knew the impact it was going to have on children and families who needed mental wellness programming would be significant.”

Now serving as SFI’s VP of Strategy and Engagement, she says it’s still the client’s hard work and success that drives her. “I’ve changed roles over the years, but all of them played a part in providing quality mental health programs to people who need it the most – no matter where they live or how much money they have. That’s why I do what I do.” 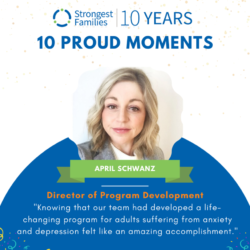 April Schwanz can instantly pinpoint her proudest moment from the last decade with Strongest Families.

It was in 2018 when SFI’s Adult ICAN program was launched in Newfoundland’s capital city. “Coming from St. John’s myself made it that much more special – knowing that our team had developed a life-changing program for adults suffering from anxiety and depression felt like an amazing accomplishment.”

As SFI’s Director of Program Development, April played the lead role in the ICAN program’s creation. She drew on the experience she gained by having had a hand in many of SFI’s key areas over the years – evaluation, coaching, quality assurance, training, research, and even finance.

It’s this variety (and the people) that, for her, makes SFI such an incredible place to work. “Strongest Families is always changing, adapting and improving. The growth since I started has been phenomenal! It makes it such an exciting organization to be part of.”

That and knowing she is making a difference in many families’ lives, with long- term impacts. “It’s very rewarding. I’ve been fortunate to have grown personally and professionally alongside some amazing colleagues.” 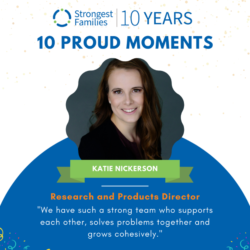 Katie Nickerson’s proudest SFI moment came in 2013 when meeting in person a family she had guided through several programs, helping them become “the strongest family”. Young Zac lived in Banff, AB and as Katie had done the distance coaching from SFI’s Nova Scotia’s office, he asked her to attend his SFI graduation party via Facetime.

She did better than that.

Quite serendipitously, Katie and her husband were driving across Canada to their new home in British Columbia and were able to stop in Banff and attend Zac’s party in person!  As you would expect they were received with great excitement and a few tears.

Katie joined SFI in September 2010 as an Intake Assistant and today serves as its Research and Products Director. She is also the acting Field Services Director. When asked about her tenure at SFI, she says “I advanced by pushing myself and others to grow, thinking outside the box, respectfully challenging the norm, seeking learning opportunities, and contributing wherever and whenever I could.”

She says the best thing about working at SFI is the collaboration. “We have such a strong team who supports each other, solves problems together and grows cohesively.” 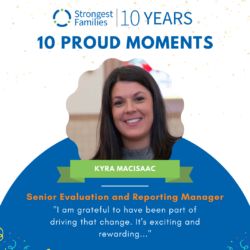 When Kyra MacIsaac started as an Assessment Assistant with Strongest Families in 2011, it was still called Family Health, and its entire staff complement numbered less than today’s management team. The assessment assistants took turns answering the one mental health intake phone that served not just SFI but all provincial mental health services. With no “fancy” software system like SFI’s current ADP, Kyra worked laboriously with spreadsheets, word documents, breaking down timesheets, etc.

So, it’s not surprising that the thing she likes most about working with SFI (besides its people, of course!) is its willingness to change and adapt. “I am grateful to have been part of driving that change. It’s exciting and rewarding to adopt new technologies and systems that impact all SFI staff and ultimately translate into more families helped.”

Kyra’s very proud to have created SFI’s Assign Coach Calendar (ACC) to track and schedule Coach’s clients and schedules. “When we were smaller, we could just physically pass files to Coaches without checking calendars. Then we started tracking case files in a word table, but this became quite messy and convoluted with growth. That’s when ACC was developed.”

In her current role as Senior Evaluation and Reporting Manager, she thrives on the many changes she’s seen and experienced – new contracts, new spaces, less paper, and now working remotely.

But she fondly remembers the early years when she would do both intake and exit for most families, and a few have just stuck with her.

In honour of SFI’s 10th anniversary, we are showcasing employees who have been with Strongest Families for a decade or more, helping us become the amazing charity we are today. We invite you to read about their SFI journey and proudest moments. 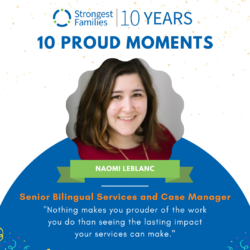 “I would never have imagined this is where (Strongest Families) would be 10 years ago.”  That’s how Naomi LeBlanc feels today about the small organization she joined in June 2010.

She started as an Evaluation Assistant and then trained as a Coach. “Because our team was small, I was mentored by our leaders at the time, which helped to develop my leadership skills.”  Naomi continued to grow with the organization, now serving as SFI’s Senior Bilingual Services and Case Manager. “I ensure our services are available in French and English.  I also mentor field staff as they navigate working with a diverse population of children, youth, adults and families.”

She says her proudest work moment is when SFI received its first donation from Bell Let’s Talk, citing that as “an amazing milestone.”

The best part about her job – seeing our clients succeed. She fondly recalls a parent and child she coached through the Chase Worries Away program. “The family had a lot of success in overcoming anxiety and we built a great rapport.”  About a year later, Naomi received an email from the parent expressing their gratitude and telling her that the family continues to practice what they learned in the program.

“Nothing makes you prouder of the work you do than seeing the lasting impact our services can have.”

The COVID-19 pandemic has affected many Canadians. The Strong Families Institute recognizes that many families, youth and adults are experiencing more pronounced symptoms due to the many unknown variables surrounding the pandemic.

We are responding by helping clients affected by COVID-19 and supporting those who experience impacts in their daily activities due to more sensitive behavior and anxiety concerns. We are closely monitoring provincial plans and public health guidelines for combating COVID-19 and adapting skills to meet the unique needs of clients during the pandemic. Please note we are NOT an emergency service.  If you are in need of immediate help, please call 911